I’ve written elsewhere about our arrival in Chicago. We had been traveling ten weeks and I was tired. Chicago is where I had first begun to wonder whether it was traveling that I was actually doing, but there was still much to do and see in Chicago and beyond.

Our budget, combined with the fact that our visit coincided with Lollapalooza, had us staying in the suburb of Elk Grove instead of central Chicago as we had wanted. We didn’t realize that Lollapalooza was the cause of our displacement until we happened upon the three-day music festival while walking from the Lake Michigan shoreline to Millennium Park. By the end of our five day visit we had come to appreciate Elk Grove’s slower pace and placidity; particularly, Busse Woods, a forest preserve with seven miles of bike paths. 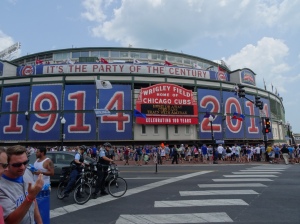 We took the Wrigley Field Express bus which dropped us off across from the stadium’s entrance and headed into the Cubby Bear bar for a pre-game dog, tots and beer. It was a lively, authentic and fun joint! And, YUM…

Wrigley Field was the fifth MLB stadium we had visited on our tour; it also ended up being the last as our route was leading us westward and into the wilderness. We would not emerge until the first of September when we arrived in Seattle and the Mariners were on the road. By the time we would arrive in San Francisco the first of October, the Giant’s regular season was over. So, Wrigley Field was our last MLB experience, but what an awesome ending! 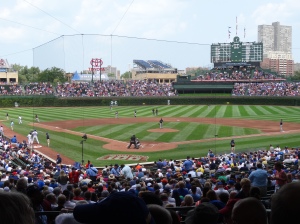 The crowd was great — if you really want to get to know the culture and people of a big city, go to a baseball game. Cubby fans were boisterous as the cubs scored the first three runs of the game which was enough to win the game.

The renowned architect lived and worked in the Chicago area for the first twenty years of his career and left it with a vast collection of his prairie house designs. Most of the homes are privately owned, but there are several operated by the Frank Lloyd Wright Trust and open for tours.

We chose to tour Wright’s residence and adjoining studio in Oak Park. While the prairie home design was different, it followed basic constructs of late 19th century perceptions of what a family home should look like. Wright was only twenty-one when he designed his impressive Oak Park home and thirty when he designed the studio. I think the greatest enjoyment for me was seeing the contrasts between Oak Park and the Fallingwater residence we had visited outside of Pittsburgh.

The differences between each home’s environments obviously would demand and conjure up practical and creative differences, but the contrasts I’m referring to are the varying levels of Wright’s growth and development into a true creative. He was sixty-eight when he designed Fallingwater, and had obviously freed himself from designing within perceptions other than his own.

The tour took us about an hour and half and afterwards, we walked around the historic neighbor enjoying other beautiful homes. The Trust offers a self-guided audio tour of other FLW designed homes in the area but we opted to go it on our own.

Trey joined me for an early morning yoga class at the Adler Planetarium. It was his first yoga class and as he said, “it got my heart going.” The class was held in the Granger Sky Theater and we moved from pose to pose while constellations and the Milky Way crossed above and around us. We then ended in resting pose while lying under a massive full moon. It was a pretty incredible experience for this yogi!

The Adler sits on the bank of Lake Michigan, opened in 1930 and was the U.S.’s first planetarium. It continues operating as an astronomy and astrophysics research center and offers many workshops and educational opportunities to the general public. It also serves as a museum and houses some fascinating centuries-old tools used in studying, measuring and mapping the stars. One can catch a short film that carries watchers through the cosmos, or “ride” the Atwood planetarium — a metal sphere constructed in 1913 that holds eight people and rotates around them. The stars are actually light that emits from holes that were punched through the metal at varying sizes. The sphere and holes create a scale model of the observable night sky from the perspective of being anywhere and everywhere on earth.

There is much more to do and see in and around the area of the planetarium, including simply sight-seeing, which is what we did for the remaining afternoon. We walked along Lake Michigan and watched the boats go in and out of the harbor…

…explored Millennium Park, played and posed in front of the Cloud Gate…

and marveled at the abounding architecture and public art.

We’re often asked about the parts of our U.S. tour that were our favorites. Well, in the art museum category, Trey and I hands down agree that the Art Institute of Chicago was nothing short of spectacular.

We had heard that one should plan to spend a day there, so, based on several past frustrating experiences in which we had not heeded such advice, we devoted an entire day to exploring the institute. It ended up not being enough time, but what we did explore of the three building, four level museum was pretty darn amazing.

Their collection seems to represent every age, culture and medium across the globe – from ancient Greek vases, thousand year old Mesoamerican figurines, and renaissance period armor…

…to American folk art, famous modern and postmodernism paintings, mid-century architecture, and film and photograph of all sorts, to name a few.

We left the museum with the agreement that we would visit it again and then headed off in the rain to find dinner.

I feel that the evening walk in the rain provided us with a good sense of Chicago’s vibe and beauty.

Dinner ended up being Italian at Tesori Trattoria and Bar. It was one of those occasions in which we were too famished to remember to take photos – a perfect ending to a perfect day. Plus, the carbs and wine helped us to get a good night’s sleep and prepare for the two-day trek to South Dakota.

Here’s more beauty from the Art Institute of Chicago…