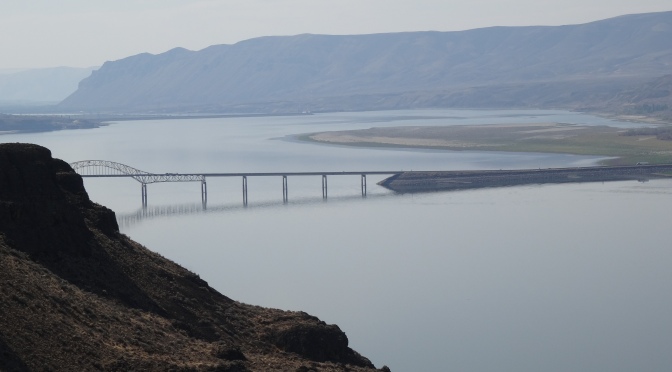 After grabbing dinner at the Old Town Café in West Yellowstone, we gassed up the “Escape Mobile” and headed north to connect with U.S. 287 — a highway we had traveled countless times across north Texas, but never across Montana.

Hands down, the Montana portion is more interesting and beautiful

while traversing the east bank of the Madison River, between canyon walls, and along the shorelines of several lakes.

Positioned in the lower western sky, the sun provided great photo opportunities of the lakes. (Photo above is Hebgen Lake.)

A particularly long stretch of a lake prompted our curiosity and called for us to stop at its overlook point.

Quake Lake had been formed exactly fifty-five years prior when the combination of an earthquake, massive landslide, and subsequent rushing, rising water flooded the valley.

Just minutes after the quake and slide, the new lake began forming. In the following weeks, it grew to encompass an area five miles long and 190 feet deep.

The formation of the lake came at a great cost – twenty-eight people died the evening of the earthquake, either by drowning or being crushed in the landslide.

For Trey and I to be the only individuals standing above the former campground on the 55th anniversary date of its tragic demise, was surreal and humbling.

Before continuing the drive to Butte, where we would spend the night, we said a short prayer in honor of the lost souls.

The 316 mile trip from Butte to Spokane…

included a seventy-four mile trek across the top of Idaho.

As we approached Idaho, the trees grew dense, steep ravines began crossing under Interstate 90, and fall colors dotted the hillsides.

We were in Idaho just long enough to realize we should have planned a stay there. Next time.

After settling into a hotel on the outskirts of Spokane, we headed downtown for dinner and a walking tour of the city. Spokane was a pleasant surprise because we had no expectations. No thoughts whatsoever, other than a place to sleep for the night. I think perhaps its location in eastern Washington, and its lack-luster name, conjures up images of dust and doldrums.

Spokane is the opposite — lively and lovely.

The Spokane River runs through the city’s center. A river walking path was being extended as a part of a larger Riverfront Park renovation plan.

On to Mt. Rainier…

We stopped at a lookout point outside of Vantage, Washington to bask in our first sight of the immense Columbia River.

Ginkgo Petrified Forest State Park lay just beyond the opposite bank and was once home to the Wanapums, an indigenous, peaceful tribe of fishermen who are near extinction. 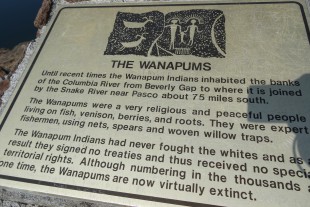 A few hours after crossing the Columbia, and after refueling both the car and our bodies in Ellensburg, we soon caught our first glimpse of the mammoth Mount Rainier. 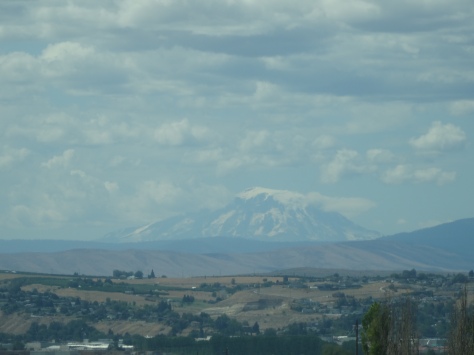 The sighting renewed our energy and enthusiasm for the remaining two hour drive to our campsite.