We departed Black Hills National Forest with the sunrise and via the infamous community of Deadwood, South Dakota.

After breakfast wraps and coffee at Wild West Espresso in the also infamous ranching community of Sundance, Wyoming, we detoured 27 miles from Interstate 90 to Devil’s Tower, our nation’s first national monument under the Antiquities Act.

We were greeted by grazing buffalo and longhorns – sights we had not seen since leaving Texas.

We were officially in “The West” and it was exhilarating! That feeling was amplified at our first glance of the massive igneous rock protruding from the horizon – Devil’s Tower, or Bear Lodge, one of its many native names.

The tribes of the northern plains consider Devil’s Tower sacred and regularly conduct ceremonies or leave prayer clothes and offerings at its base. Visitors are reminded to respect and honor these traditions. As we strolled around the tower’s base on the Tower Trail, we sensed a hallowedness among the rocks and colorful cloths tied around tree limbs and branches. The feeling was no less, and perhaps greater, than the feelings we experienced within the great ornate basilicas we had visited. 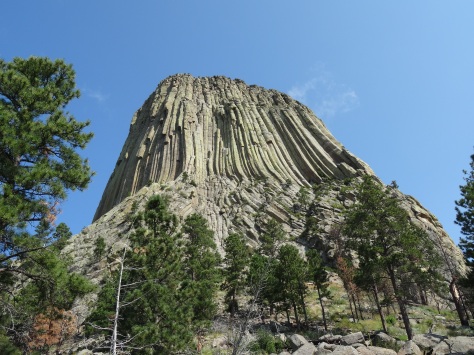 This church however was formed from and by the earth, rises 867 feet above it, and hosts a diverse group of plant and animal species. Its great columns cling tightly together in their battle against the elements and gravity. That’s what it looked like to me anyway. Kiowa legend states that the rock had been sculpted by the claws of a great bear – it’s easy to see that, too.

We had heard from a ranger that golden eagles were in the area and we spotted one fly over and around the tower’s top a couple of times, but the eagle was too quick for us to snap a photo.

We arrived at the Little Bighorn battlefield as a park ranger began recounting the story of the U.S. Army’s 1876 effort to end the centuries old independence, cultures and customs of the northern plains’ native people.

Thousands of Lakota, Cheyenne and Arapaho had joined forces in a valley east of the Little Bighorn River where they outnumbered and overwhelmed General George Custer’s regiment of 262 men.  It was one of the northern plains Indians last successful  battles in preserving their identity. We had been starkly reminded of their eventual defeat while driving through the Northern Cheyenne and Crow reservations on our way to the battlefield.

The young ranger confidently relayed the battle scene while pointing out specific hills and slopes that laid out before him and the crowd that had gathered. He was Crow and a U.S. government employee.

Lacking the time for a guided tour, we walked along Battlefield Road and walking paths surrounded by tombstones that had been placed where bodies had been found. 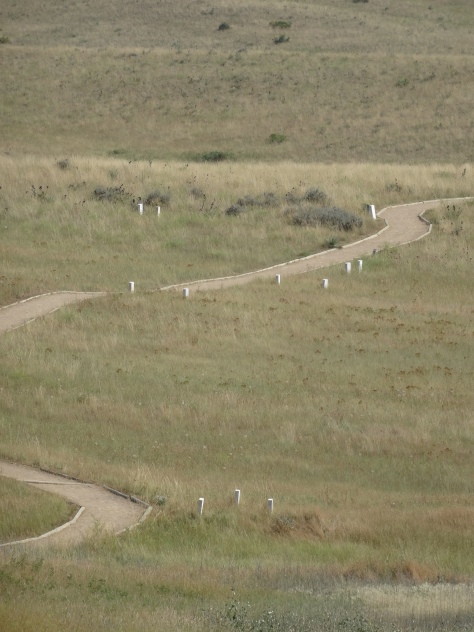 Last Stand Hill and the Indian Memorial are easy walks from the visitor’s center. 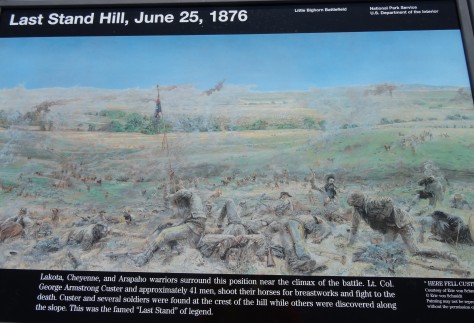 We left the monument feeling somber and wishing we had been able to spend more time there.

As it was, we had two more hours left of the seven and half hour drive to Red Lodge, Montana. 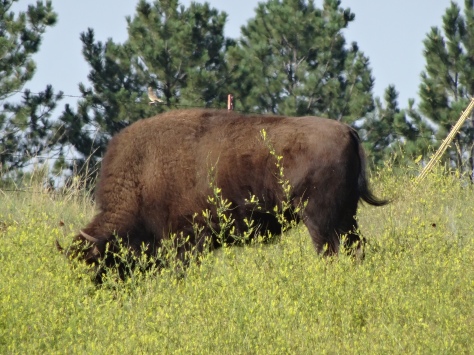 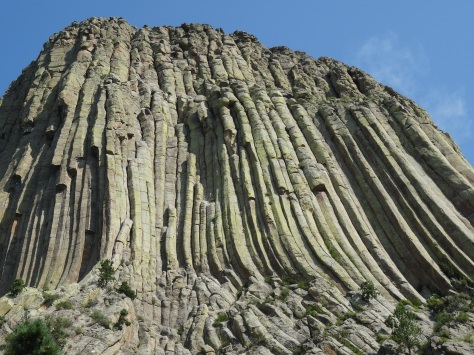