We experienced two firsts during our stay in Red Lodge – we saw our first bald eagle in the wild, and we saw our first sign of the coming autumn. Both of these firsts took place while rafting (without a camera) on the Stillwater and Yellowstone Rivers. We had been hoping to spot a bald eagle as they’re pretty common in the area; the changing leaf colors on Aspens and Cottonwoods was a surprise though. It was early August and autumn was arriving. We would follow its arrival from that point across the remaining west and into the northwestern states and Canada. Much like we had followed the hydrangea bloom up the eastern states and into Vermont.

Red Lodge is a former mining town and retains the rugged charm of its past in the late 19th century brick buildings that line its main street, Broadway Avenue. We stayed in one such building, The Pollard, which claims to have hosted legends such as Bill Cody, Calamity Jane and Harry Longabaugh, a.k.a. the Sundance Kid, who ended up robbing the bank housed on the building’s first floor.

There’s not a whole lot to do in Red Lodge other than strolling Broadway’s sidewalks to browse gift shops and scout restaurants, of which there were many. Nightly dinner options were difficult decisions due to the many amazingly good options. We particularly enjoyed Bridge Creek Backcountry Kitchen & Wine Bar and the Carbon County Steak House, where we dined on fresh Alaskan Halibut. 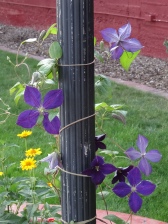 For as much as Red Lodge appears to be the standard western outpost trying to attract visitors with a taste of the past, in actuality, we found it to possess a progressive sophistication. This was evident in the food, the local market and the people making a living there. There was also a yoga studio that offered destination hiking and yoga trips in the mountains that I sadly had to miss. We will have to get back there. 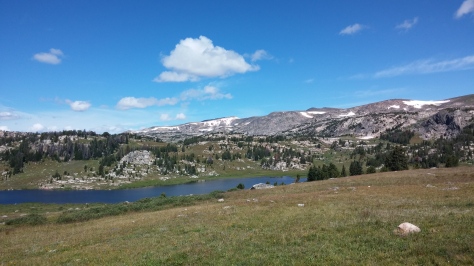 The adventure starts at the city’s perimeter where the Montana wilderness begins. We had received a warm welcome, loads of helpful advice and maps at the visitor’s center on our first full day in Red Lodge and then immediately headed out of town via West Fork Road to a trail labeled as a good “conditioning hike.”

The Basin Creek Lakes Trail ascends steeply for two and half miles following Basin Creek to a lower lake and then continues for another mile and a half to an upper lake.

We opted to turn around at the lower lake for a total roundtrip hike of five miles. We had started to turn around after about two miles because I was growing more apprehensive as we headed further into the wilderness. We were in the middle of grizzly country and seemingly alone on the trail…bear bait. Just as I had talked Trey into turning around a group of twenty-somethings caught up to us and then quickly passed out of sight. I decided I could make it the rest of the way and the reward for my bravery was the gorgeous scene and the serenity of the mountain lake.

Our other outing was the aforementioned rafting trip. Adventure Whitewater is located 35 miles outside of Red Lodge near the community of Absarokee. In addition to bald eagles and fall colors, our three-hour/half-day ride included rapids on both the Stillwater and Yellowstone rivers, swimming among the currents and jumping off a giant boulder. Trey enjoyed the jump so much he hiked back up onto the rock and back-flipped off.

The drive to/from Absarokee wends through the foothills of the Beartooth Mountains and was gorgeous as the sun and an approaching storm highlighted the golden rolling hills.

Our last evening in Red Lodge was spent doing laundry (there’s a nice laundromat on south end of town) and filling our coolers in preparation for five nights of camping in Yellowstone National Park.

We headed to Yellowstone’s north entrance via the Beartooth Highway (U.S. Highway 212) which the late Charles Kuralt proclaimed to be the “most beautiful drive in America.” 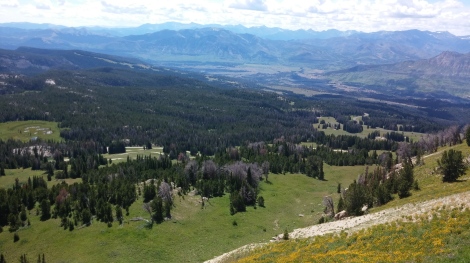 We have to agree with Mr. Kuralt. We experienced many wondrous pathways during our U.S. tour, and Beartooth tops our list and provided us with the unique sense of driving on top of the world.