Leaving Tusayan before breakfast, we headed southeast toward Flagstaff. The Escape Mobile had traveled 5,037 miles since leaving Seattle, so it was time for her fourth servicing.

Flagstaff was on the way to Phoenix, where we’d planned to spend the night, and it had a dealership that honored our maintenance purchase agreement. While waiting on our vehicle, we enjoyed a traditional breakfast at the Grand Canyon Café on Historic Route 66 in the quaint heart of Flagstaff.

Stepping into the café we’d entered a time warp… booths with mint-green Formica tabletops and individual jukeboxes, and a soda bar that spanned the length of the café. The owner told us they’d been continuously open  for nearly 75 years. Sadly, the Grand Canyon Café has since permanently closed.

Fifty-six miles down Interstate 17 we stopped at Montezuma Castle National Monument, the former hillside condo-like dwelling of the ancient Southern Sinagua people. The Sinagua were farmers and hunter-gatherers that thrived in the Verde Valley from the 1100’s through the 1300’s. 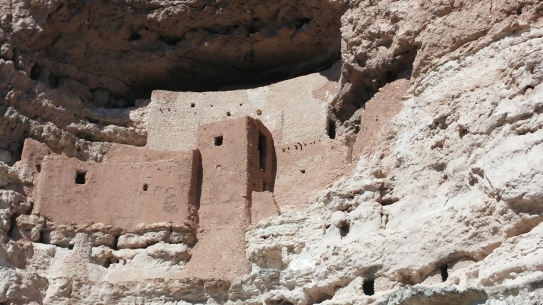 For unknown reasons, in the early 1400’s they abandoned their homes and the Verde Valley.

The visitor center is just off the interstate and the walk to the cliffside remnants is short and quick. Music of flutist Harry Seavey, who was on site, filled the air and added an authentic and surreal feel to our experience. 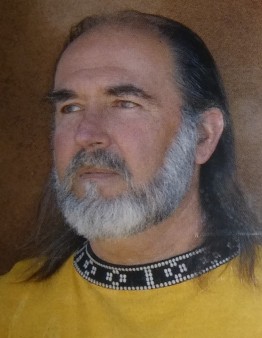 “There is a message in our hearts, a truth we all know. We feel it as we walk in a forest or sit in the desert. It is the message in the cry of a hawk and in the voice of a flute. It is our connection to life; the message that we are one with Spirit.”
~ Harry Seavey

Factoid: The monument bears the name “Montezuma” because it was originally mistaken to be built by Spanish Explorers. 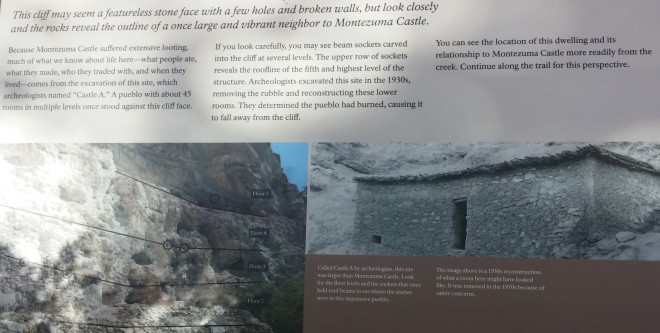 Regrets:  For some reason we felt pressed for time and did not venture the 23 miles to Tuzigoot National Monument, another Sinagua village located atop a ridge 40 minutes northwest of Montezuma Castle.

Nor did we detour from I-17 onto Hwy 89A to visit nearby Sedona, a funky, spirited community that I would have loved, I’m sure.

As we navigated around Phoenix’s maze of highways to a hotel near Arizona State University, the sun still shone from fairly high. We entertained ourselves by strolling the campus and chowing down on some chain Chinese food before vegging in front of the television for the night.

The most interesting part of the remaining 355-mile drive to our next destination, San Diego, was the shortcut to Interstate-8.

Arizona Hwy 238 cuts across the Sonoran Desert between Maricopa and Gila Bend. It was originally built to serve a hazardous waste facility that I don’t think was ever built. It appeared to solely serve as a desolate cut-thru that provides a genuine desert experience.

Saguaro cacti tower just off the roadway, which resembles concrete waves flowing through a sea of white sand. 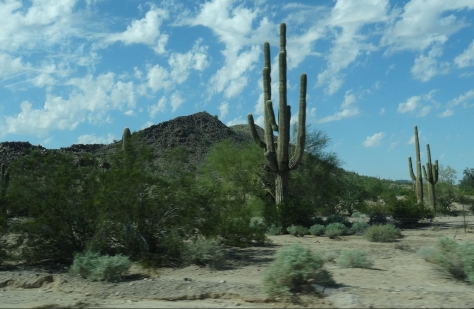 Blowing sand was accumulating across the road’s lower points, and it seemed like the desert was determined to conquer the road.

After an initial hotel snafu in San Diego, we settled into a Four Points Sheraton using points and began planning the next two day’s adventures.