I don’t remember what prevented us from researching our next steps, which were to explore Grand Staircase-Escalante National Monument and hopefully hike Coyote Buttes in the Vermillion Cliffs, also known as “The Wave.” It was either our full schedule and lack of regular cell service or laziness and naivety.

Either way, upon leaving Mount Carmel Junction we meandered along Highway 89 for 60 miles until we ran into a Bureau of Land Management (BLM) station and stopped to ask where in the heck we could find the Grand Staircase-Escalante Monument.

We found out that we were already in it and had been for a while. At that time the Grand Staircase – a series of massive geological steps – sprawled out across 3,000 square miles of southern Utah and northern Arizona.

The downward steps stretched from Bryce Canyon to the Grand Canyon’s northern rim. In 2017 the protected area was sadly cut almost in half.

We were also informed that there’s a lottery process for hiking “The Wave.” The sign-up and drawings take place in Kanab, Utah – a town we’d passed through forty miles back. Backtracking to the Kanab BLM Station we learned that only 10 hikers per day are allowed into the buttes, and that the “lotteries” take place each morning for the next day’s hike.

Should we stay or should we go? We contemplated this question over lunch at Escobar’s Mexican Food (authentic enough) and opted to try our luck and checked into a nearby hotel.

The next morning, we rose with the sun and walked back to the BLM office to stand in line. We were 7th out of 64 to register for the lottery, which was pretty good odds on a relative basis as the average day has well over a hundred registrants. But #7 was not lucky that day, so we checked out of the hotel, and after a breakfast at Nedra’s Too, we checked out of Kanab via Highway 89A South.

The ranger who on the previous day clarified Grand Staircase’s massiveness had recommended we stop at Le Fevre Overlook, a rest stop along Highway 89A about 25 miles into Arizona. It’s unassuming and easy to miss but worth the stop.

From the overlook you can make out the distant cascading landscapes that inspired the monument’s name, gaining senses of both its beauty and magnitude.

Continuing south for just over eleven miles we cut down State Route 67 (also called the Kaibab Plateau Parkway) for the 43-mile drive to Grand Canyon’s northern rim.  Being late October, the north rim’s lodges and campgrounds were closed so we had the drive mostly to ourselves.

Along the way, I spied a California Condor perched on the limb of a dead pine and we were reluctantly received by a herd of buffalo on the return trip. 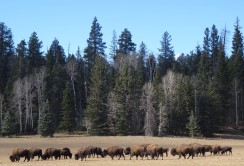 A nip of winter was embedded into the breeze, but the clear sky and sun helped warm us as we strolled along the various paths and vantage points below the lodge cabins…

an environment and scenes that contrasted with what we would experience in the coming days on the canyon’s other side. 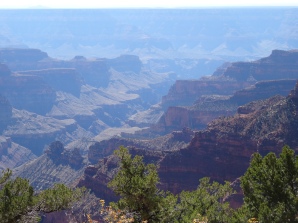 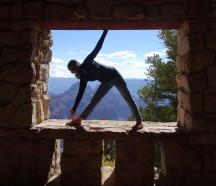 Leaving the north rim we had a four hour drive ahead of us… plenty of time to circle around the east end of the canyon and make it to the south rim before sunset.

But the drive, curving around and between the Vermillion Cliffs and Colorado River, is spectacular.

We stopped several times including at the unexpected site of abandoned rock dwellings sitting just yards off the road and scattered among mushroom shaped formations. 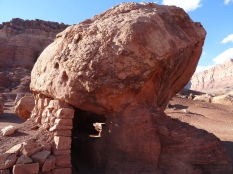 The legend is that a woman by the name of Blanche Russell was stranded there when her car broke down sometime in the 1930’s. She liked the area so much she settled there for a time.

Ten minutes down the road we stopped again to stroll across the historic Navajo Bridge that spans the Colorado River for 834 feet and parallels it’s replacement… a seemingly identical bridge that is actually wider and longer.

The “new” bridge was completed in 1995 to support larger vehicles while providing a safe alternative (the historic bridge) for those of us who want to walk over for the views.

With all the stops we lost our race with the sun.

It had set by the time we reached the south rim’s first overlook, the Desert View Watchtower…

but enough light shone over the horizon to paint the sky and reflect muted rays across the canyon.

A perfect welcoming gift to our stay on the Grand Canyon’s south rim. 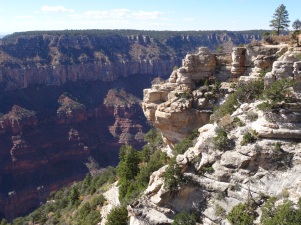