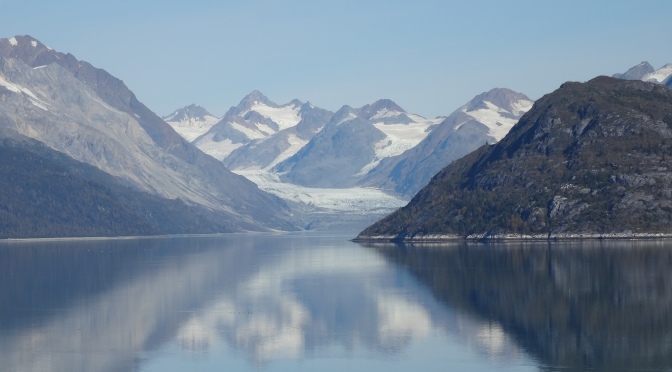 Although Trey and I wanted to see Alaska, it was not on our original wish list of sites and landmarks to visit during our six-month journey. Neither recall why we had not considered Alaska, nor do we remember how we came to realize it was doable. Since we’d booked the cruise only a month prior, the inspiration probably came from one of the many bikers and fellow travelers we encountered during our stay in the Black Hills of South Dakota.

Our “we will figure it out” mentality is all about being open to options and opportunities. As I’ve written elsewhere, “It’s about having faith… that we will know which paths to take as we approach the many crossroads of our journey.”

“ It’s the beauty that thrills me with wonder,
It’s the stillness that fills me with peace.”
The Spell of the Yukon, Robert W. Service

Truth is of the highest importance to me. In fact, my book’s subtitle is Truth is Sacred. So here’s a serving of truth about non-stop travel that may not be disclosed or properly portrayed in travel blogs, including this one:

It isn’t necessarily glamorous; it can be exhausting; it’s not conducive to practicing self-care; and immune systems get weary.

Since leaving Austin more than three months prior, I had already experienced two bouts of food poisoning. First, from sketchy pigs ‘n blankets in Atlantic City, and then from a salad in Ottawa. The latter round was especially ugly, but nowhere as odious as the 38 hours I endured in our cabin’s miniature bathroom…I’ll spare you further details, just be assured it was the opposite of glamorous. 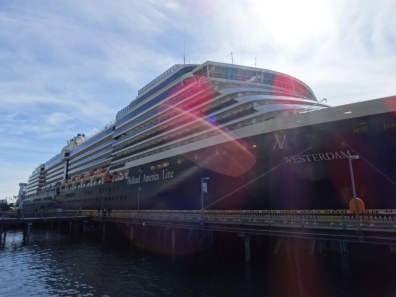 Being a seven-day cruise, I was able to rebound and enjoy most of the amazing scenery… 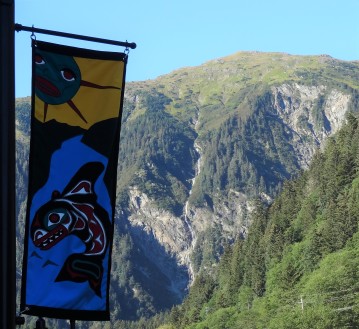 Alaska’s Capital, Juneau is a bustling tourist and government hub relative to the other communities we visited.

The path from the cruise port to the capitol building is a gauntlet of high-end jewelry stores and low-end souvenir vendors.

Our shopping goals included lunch and one item, a corkscrew to evade the cruise line’s corkage fee. We found both at the Red Dog Saloon. (Note, upon initial embarking, most cruise lines allow each guests (21+) to carry on one bottle of unopened wine. Don’t forget the corkscrew!) 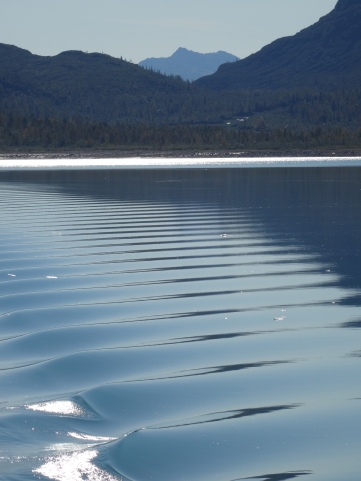 Glacier Bay was the highlight of Trey’s Alaskan scenic experience. Due to the aforementioned illness, I was officially quarantined in the cabin for the duration of our time in Glacier Bay.

Though weak and fog-headed, I loved Trey’s regular and enthusiastic updates of the 65-mile voyage up Glacier Bay into Tarr Inlet. At some point, the ship was boarded by National Park Rangers to help with navigation into the bay’s narrow inlets and conduct informational discussions as we cruised past islands, wildlife, and glacial rivers.

Travel into John Hopkins Inlet was not on the day’s itinerary, but the captain announced he’d been granted permission to enter the inlet due clear weather and decreased ice floes.

Through the photos Trey captured and his excitement in describing the day, I experienced it with him. It was absolutely beautiful!

Our ship docked among the numerous tiny islands dotting Sitka Sound, and disembarking was done via a ship’s tender – a new transportation experience for us.

A hard working fishing community, Sitka was closer to our expectations of an Alaskan city than Juneau…

less touristy, with a focus on its people and history. For me, it was like I had finally arrived in true Alaska.

Originally the site of Tlingit Village, Sitka’s roots are prominently displayed throughout. Totems align a walking path in Sitka National Historic Park, and a Russian Orthodox Church is the focal point of Lincoln Street, the city’s main street.

With limited time, and even less energy on my part, we were not able to explore beautiful Sitka as we would have liked. Yet, we were there long enough to discern it as a unique community full of grit, charm, and justified pride.

I immediately recognized Ketchikan from photographs my parents had taken decades before. Quaint, colorful, and picturesque. Creek Street, and its elevated walk lined with vibrant shops perched above Ketchikan Creek, is quintessential Alaska.

We followed other tourists across wooden planks, in and out of shops, and around bends of the creek where an unimaginable number of salmon were making their way upstream. 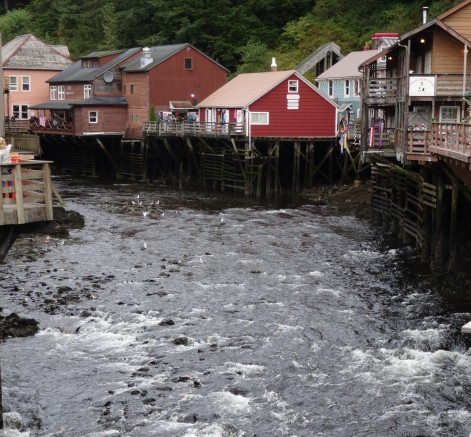 Continuing beyond the walkway’s end, we found a trail leading up to and through a thicket of firs…

eventually emerging where the creek flattened and opened into a larger pool. Spawning salmon provided the effects of churning currents and rapids within the pool – a truly wondrous display. 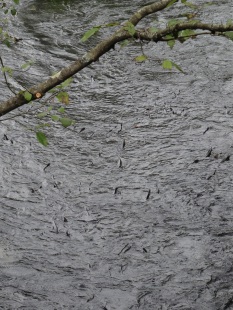 With much amusement, we watched a beaver disguise himself with a palm leaf as he snuck into the pool for lunch. 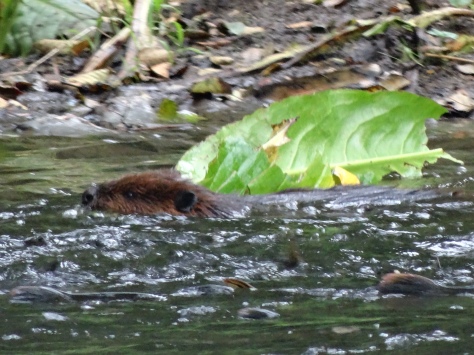 Rather than backtrack, we opted to forge our own path back to the cruise ship, and on the way, discovered totems, Ketchikan’s City Park… 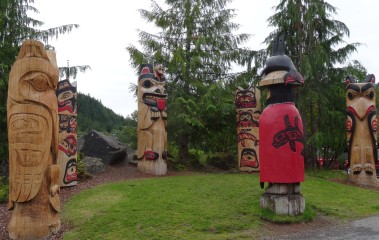 The center was established in 1976 to prevent further erosion and destruction of the totems. 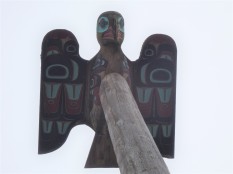 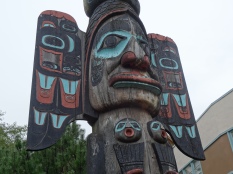 After sailing five hours from Ketchikan, we docked in Victoria, British Columbia. We were happy to be back, and chose to spend our time on an evening excursion to Butchart Gardens.

Truly stunning, Butchart Gardens is a must see. The vision of a cement baron’s wife, its expansive gardens stretch across 55 acres in and around the site of a former quarry, the rock source for the cement that helped to construct Victoria and British Columbia. 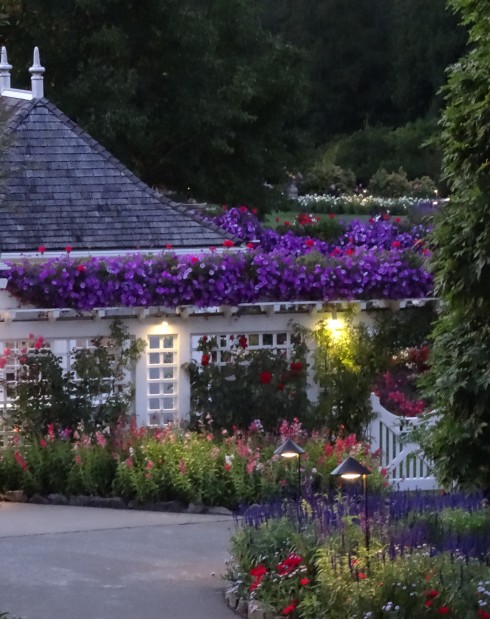 Arriving at sunset, our visit was muted by the lack of daylight, but enhanced by fantastic light shows and special effects lighting that illuminated spectacular blooms.

Daytime or nighttime tour? I cannot say which is better, having not experienced the former. I think perhaps they’re just very different, and cannot be compared.

Though restricted on time, we managed to stroll through each section, starting with the sunken garden, through the rose garden, and finishing in the Italian garden. 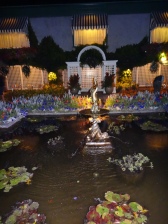 It’s a good thing we didn’t linger much longer, as the shuttle bus driver had miscounted heads and was readying to head back to the cruise port.

Disembarkment in Seattle began the next morning, a Saturday, at 7:00 a.m. Having endured long lines during initial boarding, we resolved to pay for an early disembarkment time.

Numerous tasks awaited, including dirty laundry, returning a borrowed formal dress (required for some cruise dinners), and retrieving our bicycles and camping gear from storage. 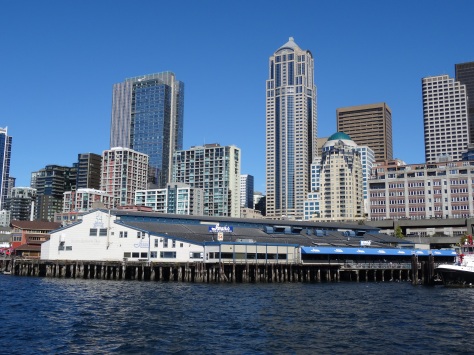 It was nearing 2pm when we purchased tickets for the next ferry crossing to Bainbridge Island, leaving just enough time to walk next door and grab some fish n’ chips at Ivan’s Acres of Clams. Then it was…

on the road again… 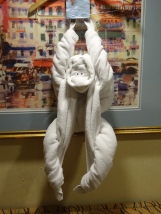