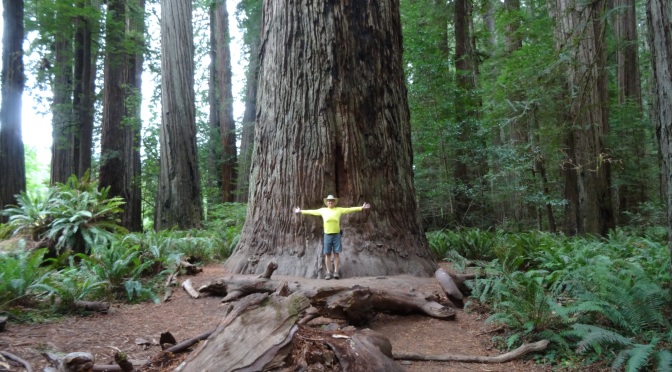 The “Redwood Forest” is a patchwork of federal and state parks along California’s northern coastline.

Together, they’re a UNESCO World Heritage site with joint missions to manage and preserve the remaining old growth forests. Before effective efforts to protect the giant redwoods were established, logging had wiped out 70% of them. Yes, 70%!

Arriving at the Jedediah Smith Redwoods State Park, located in the northern end, we’d officially traveled from the gulf stream to the redwoods.

Being surrounded by new growth trees and thick underbrush provided our campsite some privacy. And for me, senses of comfort and safety came with sleeping among the giants.

We spent our afternoon exploring the campground and forest. Trey and I had previously encountered a few giants – a young transplanted sequoia in Victoria’s Butchart Gardens, and firs around Mount Rainier and Mount Olympus – but those trees did not prepare us for the magnitude, majesty, and grace of the old growth redwoods. 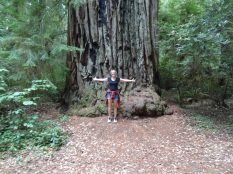 It was love at first sight!

The park’s campground sits alongside the Smith River.

Being September, it was unlikely we’d catch a trout or salmon, so we didn’t purchase licenses. Instead, each evening we walked along the riverbank, admiring river rocks and wildlife, and keeping an eye out for bears.

While Stout Memorial Grove is near the campground—it sits just across the river—the old growth grove is not easily accessible by car. The grove is off a narrow dirt road about two miles from the main highway, US 199.

Because of its isolation, we had the grove mostly to ourselves. Taking a loop trail and then a break-off trail down to the river, we walked among the giants…

and basked in our quiet communion. 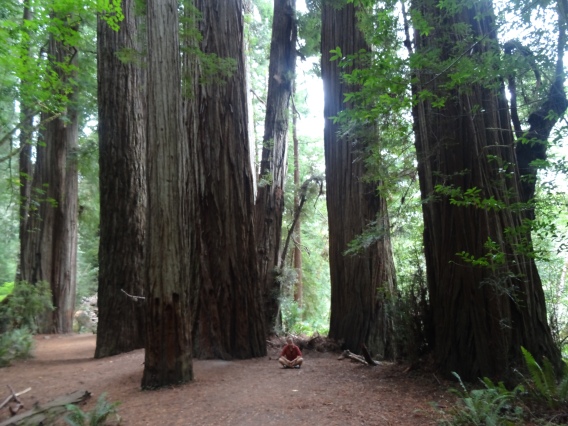 We were thrilled to come across another banana slug because 1) they’re awesome!, and 2) we missed photographing the first one we spotted in our campground. 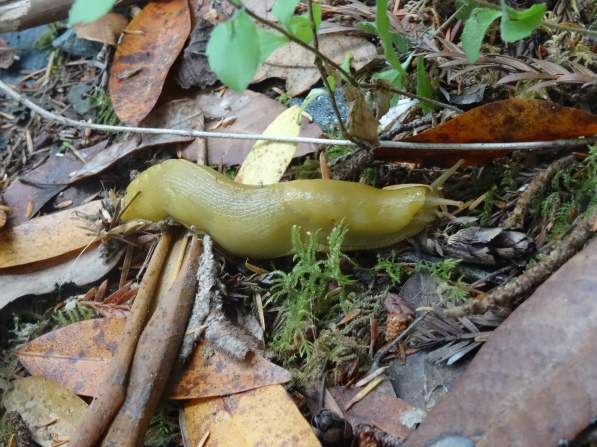 Leaving the grove, we continued down the dirt road, Howland Hill Road, into the community of Crescent City.

We highly recommend this drive! In all, it’s only about six miles, but allow plenty of time for winding through the giants, braking and backing for passing cars, and stopping for photos.

Once in Crescent City, we shared a beer and filled up with good Tex-Mex at Perlita’s before heading back to camp for the evening. The sky was overcast, but the chance for rain was only ten percent.

Claps of thunder woke us at midnight followed by a downpour that continued through the night. Though dry inside, by 6:00 a.m. our tent’s floor felt more like a waterbed. 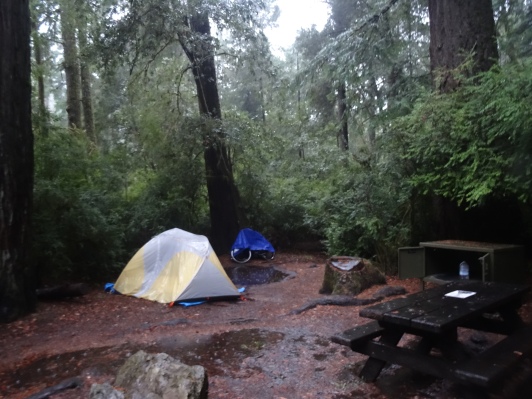 Stepping out to go to the bathroom before breaking camp, we discovered our shoes had floated away with the small stream running thru our campsite and under our tent. We found them in the brush behind the tent, then packed up our soaking selves and threw our gear into the Escape Mobile to leave.

Still raining, we took refuge in The Chart Room, a seafood restaurant that happened to be open for breakfast. The rustic restaurant sits on a narrow peninsula dividing Crescent Harbor and the Pacific Ocean, and its windows provide great views of both.

As we ate, we watched a sea otter catching his breakfast and frolicking in the calm harbor, while across the restaurant, we saw 10-foot waves crashing over the levy onto the road.

Driving south down the coastline on U.S. 101, the waves continued roaring just off the highway. Before reaching the cutoff to our detour to Redding, we stopped at Lady Bird Johnson Nature Grove. 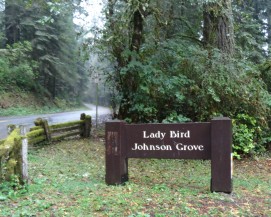 The first First Lady from Texas played an active role in the conservation and beautification of many of our nation’s natural treasures, including a section of the Colorado River that runs through Austin. Of course we had to stop!

The rain let up as we arrived, but we’d trekked only a quarter mile and had taken a couple of photos before it started pouring again. Still, a great departing experience and perfect location to say goodbye to the lovely giants. 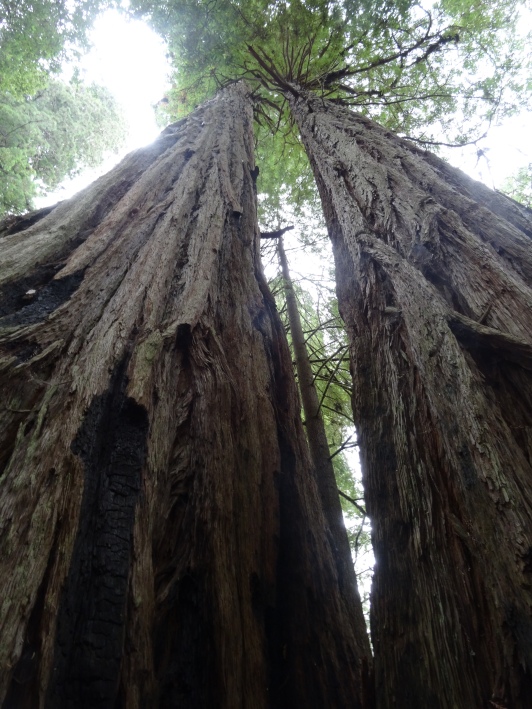 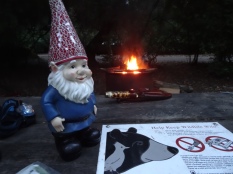 Errands and fatigue had us leaving Portland around 5pm. With a 4 ½ hour drive to Coos Bay ahead, we should have reconsidered our plan to cut back to U.S. Highway 101 at Newport. 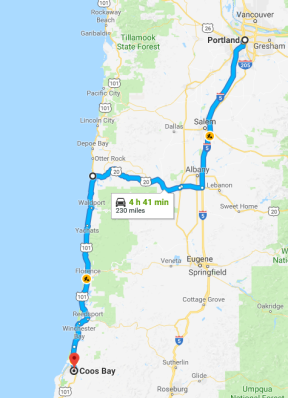 Nope, we raced to the coast, arrived at the Pacific Ocean and turned left onto Highway 101 after sunset on a moonless night.

Gorgeous beaches and landscapes rolled out just beyond the Escape Mobile’s passenger-side windows, but we couldn’t see a damn thing. With concentration, we squinted to focus on the reflection markers aligning curves and helping to prevent cars from plummeting over cliffs. It was harrowing drive, but I imagine not as much as it was for the poor guy we passed riding a bicycle without a headlight. We would have offered him a ride but he was traveling the opposite direction. I still feel for him.

With a solid night’s sleep in a cozy Best Western, we awoke the next morning to discover Coos Bay a charming, hard-working, coastal community.

Yelp led us to Mom’s Kitchen for a hearty breakfast with hashbrowns O’Brien, a Pacific Northwest staple we discovered in Seattle.

Although cloudy, the Pacific views were gorgeous and non-stop! 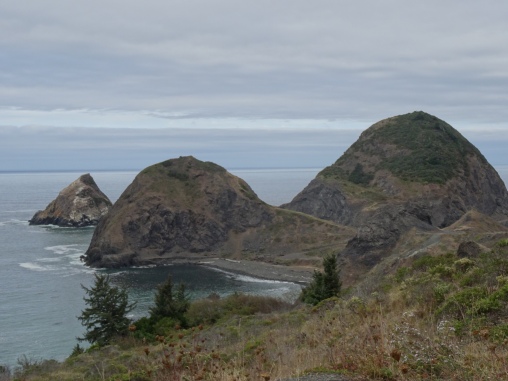 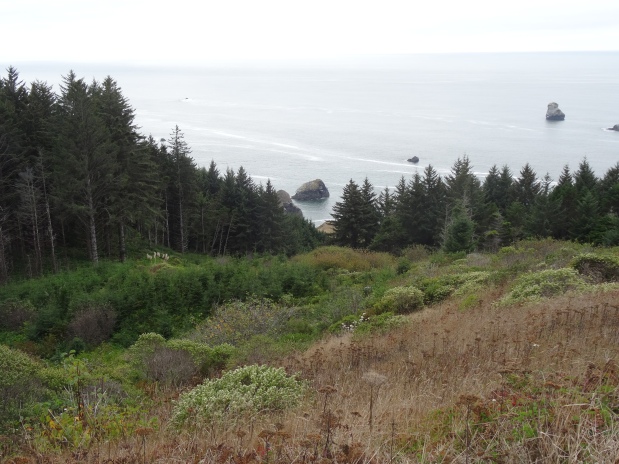 Like the drive between Astoria and Lincoln City, we stretched the three hour trip into four hours with several stops to whale watch… 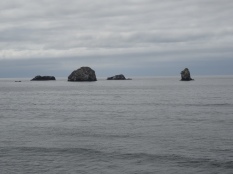 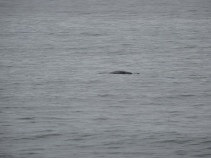 Approaching the California state line, we noticed a turnoff for “Arch Rock” viewing area. From the small parking area, a path leads through a mushroom lined thicket of firs to a ledge overlooking the Pacific. 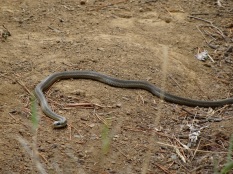 Except for a friendly snake, we had the path and views to ourselves.

From there, we were forty minutes away from our next destination… camping among the giant redwoods!

Arch Rock through the trees 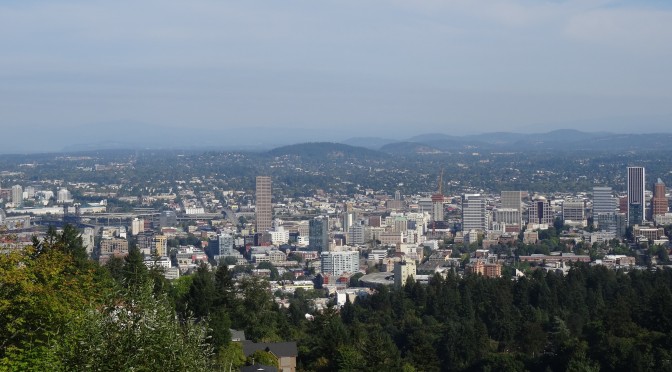 Having heard of Portland’s similarities to Austin (music scene, laid back feel, open-minded residents, etc.), we were ready to experience a taste of home.

Staying in downtown Portland wasn’t feasible, in either dollars or hotel points. Instead, we used points to stay near the Portland International Airport and used Portland’s MAX Light Rail system to get around. The Red Line stopped directly in front of our hotel; from there it was a straight shot into the heart of Portland, so the Escape Mobile remained parked for most of our stay!

Portland’s most notable similarity to Austin is its river, the Willamette, which cuts through the city’s center.

Both banks of the Willamette River are aligned with businesses, hot spots, public parks, gathering spaces, and walking/jogging/biking paths.

Carrying our bikes onto the Red Line, we stopped west of the river to begin a clockwise 11-mile waterfront ride. The Sellwood Bridge Loop led us alongside downtown and across the iconic Steel Bridge, a double-decker vertical-lift bridge completed in 1912.

Biking along the Willamette was a great way to explore the city and spot wildlife. 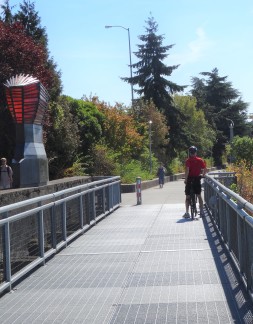 Trey on the Sellwood Bridge Loop 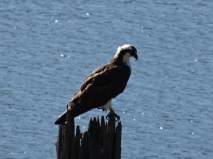 Osprey on the Willamette River

Trey was thrilled at the site of a decommissioned naval submarine, the USS Blueback (SS-581)…

and we both loved the row of float houses near Sellwood Bridge! 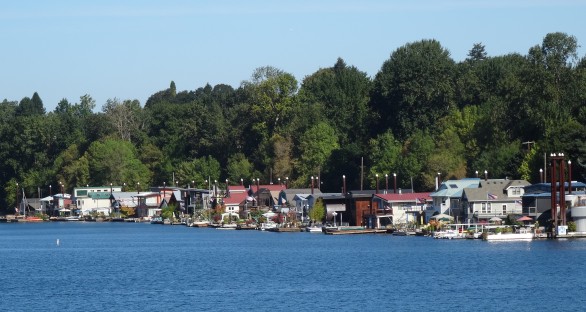 The Columbia River Gorge begins about twenty miles east of Portland and is accessible via U.S. Highway 30, also known as the Historic Columbia River Highway. The first must stop is Vista House…

an overlook and information center completed in 1918 located on Crown Point, one of the gorge’s highest points. Vista House offers great panoramas of the gorge, river valley and surrounding hills.

We were surprised to see windsurfers whisking atop the Columbia River, but the area below Crown Point is a popular spot for the sport.

Waterfalls dropping from rocky cliffs dot the riverbank as you head east into the gorge. Most, including Latourell Falls and Shepperd’s Dell, are either visible from the highway or a short hike. 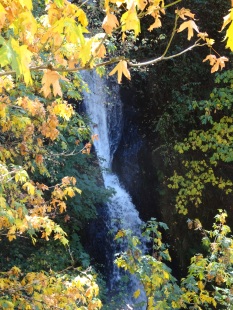 Bridal Veil was our favorite. The trail crosses a creek that may deter some from completing the half-mile trek, but keep going. The two-tiered waterfall is definitely worth it!

We climbed atop a huge boulder and basked in the sun while red and yellow leaves rained down upon us.

Multnomah Falls, photographers’ favorite, was packed and we had to nudge our way across Benson Bridge to access the trail to the top of the falls.

The roundtrip 2.2 mile hike climbs 700 feet via eleven switchbacks. Although it’s labeled as moderate, wear hiking boots or tennis shoes and allow time for breath breaks if you’re not in good shape.

The 4.8 mile loop trail we’d planned to take from the top of Maltnomah Falls over to Wahkeena Falls was closed, so it was down the switchbacks to the car for a backtrack drive west.

Trey hopped over the concrete barrier, across mossy rocks, and balanced on the creek’s ledge to get the above shot.

While visiting downtown for dinner the evening of our arrival, we were surprised to find Portland streets subdued with only a few people out and about. We figured that was because it was a Thursday. The next evening, and after a long day of bicycling, we explored the Pearl District, an area described as “buzzing” with loads of unique dining options. While there were a few more folks walking around the Pearl District, there was neither buzz nor music. This was consistent throughout our stay.

Portland lacked Austin’s vibe, that definable energy evident upon deboarding at Austin-Bergstrom International Airport where one is met with local eats and live music.

Although the weather was gorgeous, maybe our visit coincided with Portland’s downtime, or we turned down the wrong street and missed music venues. I don’t know. 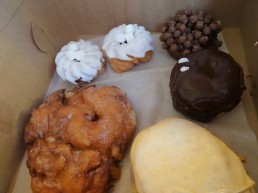 The most excitement we observed were the long, munchie lines outside of Voodoo Doughnuts. Maybe that’s why all the good people of Portland were so quiet and laidback?

On the Red Line from the airport, there’s a five-second window where Mt. Hood, Mt. Saint Helens and Mt. Rainier can all be viewed.

You need a clear day and good neck flexibility; we managed it once.

A local informed us of another vantage point in town where there’s time to appreciate the views and take photographs. In the late afternoon and on our way out of town, we stopped by Pittock Mansion, a restored chateau built in the early 1900’s by one of Portland’s legacy families.

We arrived too late to tour the home, but enjoyed strolling the magnificent grounds and the views of Portland. 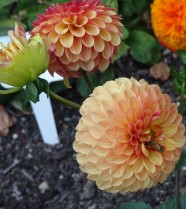 Unfortunately, clouds and haze prevented us from seeing any mountains before it was time to hit the road again.

Destinations Known: Coos Bay for the night, then into the Redwood Forest! 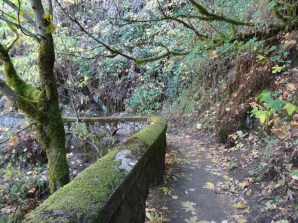 Latourell Falls through the trees